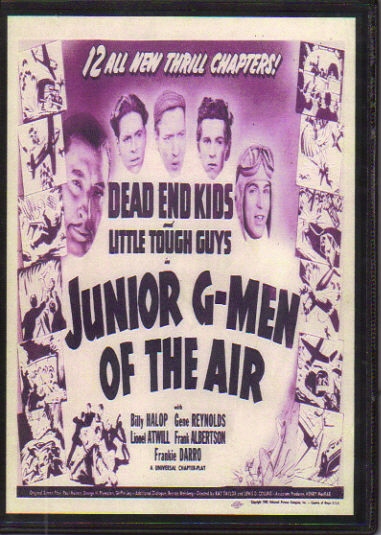 The Dead End Kids take on a sinister gang of Japanese terrorists in this 12-chapter followup to the 1940 Universal serial Junior G-Men. When Eddie Holden (Gene Reynolds), the inventor brother of street-gang leader Billy Holden (Billy Halop), is kidnapped by minions of the Black Dragon society, Billy refuses to go to the police for help. Instead, he and his pals-Bolts Larson (Huntz Hall), Stick Munsey (Gabe Dell) and Greaseball Plunkett (Bernard Punsly)-decide to take on the villains themselves. Over the course of twelve weeks, the kids are pitted against the worst kinds of villains and pluguglies, but by the final chapter our heroes have thwarted the Black Dragons’ plans to sabotage the American defense program.

Manhunt in the African Jungle (1943) Serial