Gangster Frank Olins (Robert Armstrong) is to die in the gas chamber much to the dismay of his girlfriend Margot Shelby (Jean Gillie) as he is carrying the secret of the location of $400,000 with him. Margot seduces gangster Jim Vincent (Edward Norris) to get him to engineer the removal of Olins’ body from the prison immediately after he dies in the gas chamber. She takes prison doctor Craig (Herbert Rudley) away from his nurse/girl friend (Marjorie Woodworth) and gets him to administer an antidote for cyanide gas poisoning. During the removal of Olins’ body, the hearse driver is killed by Tommy (Phil Van Zandt). The revived Olins gives Margot half of a map showing the money location and Vincent, in a fit of jealousy, kills Olins and takes the other half. Because the doctor’s plates on his car will get them through the police roadblocks, Vincent and Margot take him with them on the money hunt. 1946, B&W, 76 minutes, English with Spanish subtitles 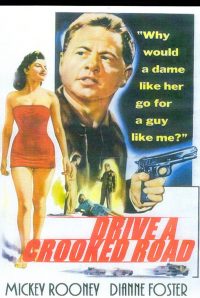