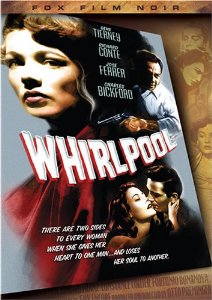 Laura will always be director Otto Preminger’s most beloved movie, but he gets closer to the essence of film noir in this fascinatingly slippery item about a psychiatrist’s wife whose weakness for kleptomania makes her prey to an oily hypnotist, con artist, and manipulator par excellence. The fashion-plate wife (dresses, robes, and peignoirs by Oleg Cassini) is played by Laura herself, Gene Tierney. The mellifluous conniver is Jose Ferrer, coming off like the illegitimate son of Waldo Lydecker ("I’m so glad you’re here–you make Tina’s party seem an almost human event"). Among other things, Ferrer would probably like to get Tierney into bed, and a good many people–including Richard Conte as the caring husband–come to believe he has. But that’s not the extent of his ambitions, and before long Tierney has been framed for a murder of convenience to clear up another bit of messiness in the cad’s career. Whirlpool‘s mise-en-scène has a sinuous fluidity and subtle play of light and shadow (it was among the last films shot by that master of black-and-white, Arthur C. Miller), and the complexly structured screenplay–by Ben Hecht and Andrew Solt–takes us by surprise in reel after reel. There’s nothing redeeming about Ferrer’s character (except how much pleasure his villainy affords), but Preminger doesn’t really side with any of the characters or permit our facile identification with anyone. Different parts of the movie are dominated by each of the key figures, including police detective Charles Bickford, and we keep learning there’s more to each of them than we initially assumed. Whirlpool‘s a good title for it. Dive in. 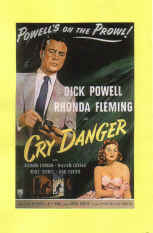