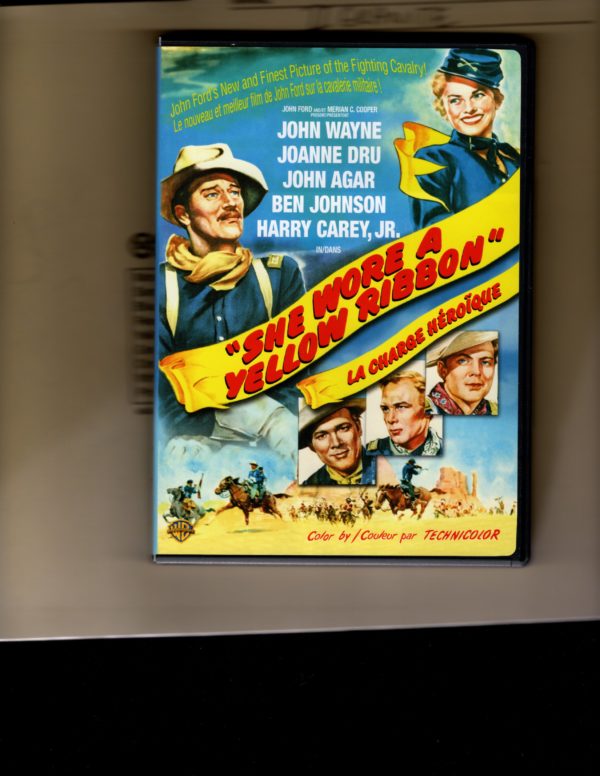 She Wore a Yellow Ribbon DVD – A lament for the passage of time and the second in the director’s acclaimed series of cavalry films, John Ford’s SHE WORE A YELLOW RIBBON stars John Wayne as Capt. Nathan Brittles, a cavalry officer stationed in the Southwest. While contemplating his retirement, which is only a week away, Brittles is assigned to escort the wife and niece of his commanding officer, Maj. Mac Allshard (George O’Brien), to the stage line at Sudros Wells. Although he would prefer to battle the rampaging Cheyenne Indians as his final action, Brittles obeys orders. En route, two of the men in Brittles’s patrol, Lieutenants Cohill and Pennell (John Agar and Harry Carey Jr.), get an eyeful of the major’s distracting niece, Olivia (Joanne Dru), and nearly kill each other trying to attract her attention. Brittles then gets word from a scout, Sergeant Tyree (Ben Johnson), that a group of Arapaho Indian warriors is heading straight toward Sudros Wells. Wayne is at his best in his sensitive portrayal of an older man reluctantly stepping away from the only life he’s known. Despite the constant skirmishing of Ford and cinematographer Winston Hoch, the cameraman won an Oscar for his work on the film and would go on to shoot the director’s THE QUIET MAN and THE SEARCHERS.