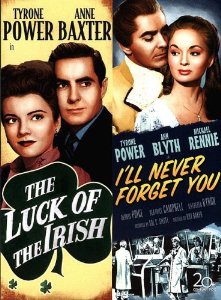 Luck of the Irish (1948, 99 min.) A political writer finds out what really matters in life when he crosses paths with a leprechaun. While traveling Ireland, American correspondent Steve Fitzgerald (Tyrone Power) meets Horace (Cecil Kellaway), an elfin-like man who leads him to an inn run by Nora (Anne Baxter). And when Nora tells Steve that he probably met a leprechaun, Steve catches and demands gold! But back home, when Steve realizes his romance with politico D.C. Augur’s (Lee J. Cobb) daughter Frances (Jayne Meadows) are no longer a priority, it’s Horace who leads Steve back to where his heart truly belongs.

I’ll Never Forget You (1951, 90 min.) Peter Standish (Tyrone Power) is living in an 18th-century house on Berkeley Square where his distant relative – also Peter Standish – once lived centuries before. But when he is struck by lightning, he suddenly finds himself in the 18th Century! Peter meets his ancestor’s fiancée Kate Pettigrew (Beatrice Campbell) but it is her sister, Helen (Ann Blyth) with whom he falls in love. As Peter tries to hide his true, modern identity, a jealous Kate makes trouble and before long, Peter finds himself back in the present where his true love might not be lost after all. 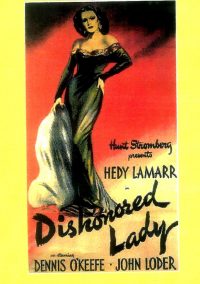