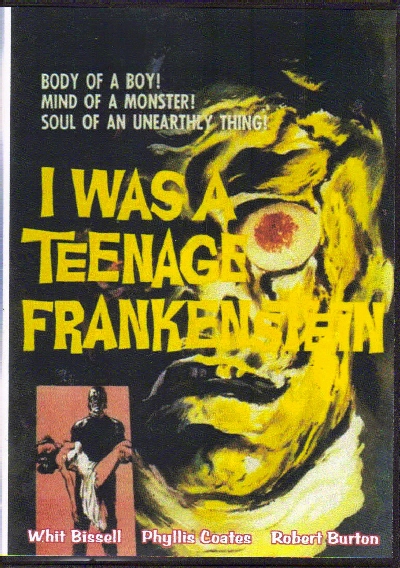 From the folks who brought you I Was a Teenage Werewolf comes this relentlessly shlocky variation on the Frankenstein legend. Whit Bissell stars as Professor Frankenstein, descendant of you-know-who, who harbors a few radical theories about limb transplantation. Laughed at by students and colleagues alike, the good professor intends to prove the efficacy of his theories in his own lab at home–keeping an alligator as a "pet" to dispose of discarded body parts. When a carful of teenagers crashes near his home, Frankenstein and his assistant Carlton (Robert Burton) gather up the bodies and begin stitching up the fragments, adding a few chunks of flesh recovered from a convenient plane wreck. The result is a teenaged monster (Gary Conway) with a bad attitude. Already a bit off in the coop to begin with, Professor Frankenstein goes completely bonkers, using the monster to dispose of such awkward witnesses as the professor’s fiancee Margaret (Phyliss Coates). The film’s final burst of violence is filmed in color, for no discernable reason. If for nothing else, I Was a Teenage Frankenstein would be memorable for Professor F’s deathless line to his sullen creation: "Answer me! You have a civil tongue in your head! I know, I sewed it in there!"