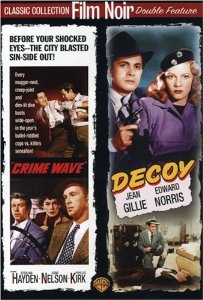 Decoy (1946) is an ultra-low-budget offering from Monogram Pictures and a fascinatingly mixed bag of Poverty Row production values and flashes of directorial ambition (one night scene in a woods strongly suggests director Jack Bernhard had seen Sunrise). Its main attraction is a cold-hearted heroine who could pledge the same sorority as the dames from Double Indemnity, Gun Crazy, and The Lady from Shanghai. (Alas, British-born actress Jean Gillie appeared in only one subsequent film, dying at the age of 34.) Andre De Toth’s

Crime Wave (1954) places us in the awkward position of being grateful for the chance to see an exciting movie and obliged to disqualify it from the set: it’s closer to the ’50s police procedural (Dragnet et al.) than to film noir. Shot almost entirely on location, the picture virtually reeks of seedy L.A. nightlife and satisfyingly unreels without benefit of music score. Ted De Corsia, Nedrick Young, and Charles Buchinsky-soon-to-be-Bronson supply juicy villainy, with a characteristically unclean contribution late in the film from Timothy Carey. Gene Nelson plays an ex-con, resolved to go straight yet being forced to abet his newly escaped old cellmates, and the world-weary cop keeping tabs on all of them is Sterling Hayden.