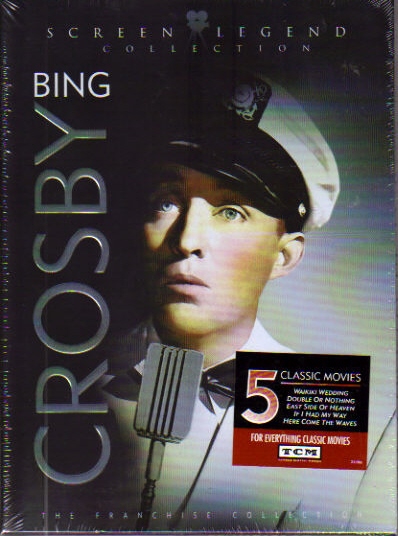 You may think you’re a Bing Crosby fan, but if all you know is Holiday Inn, The Bells of St. Mary’s, or the On the Road movies, brother, you only know half the story. Crosby had a rich, long film career, and this collection features some of the best of Der Bingle’s lesser-known films: Waikiki Wedding, Double or Nothing , East Side of Heaven, If I Had My Way, and Here Come the Waves. All showcase Crosby’s easygoing persona and, of course, plenty of crooning.

The premise of Double or Nothing could be a modern-day reality competition, with four people, including Raye again, feverishly trying to double their inheritance within a 30-day window.

East Side of Heaven costars the always appealing Joan Blondell and showcases Crosby at his bemused best as a cabbie with an abandoned baby on his hands, trying desperately (and with a few showtunes) to find the infant’s parents.

In If I Had My Way, Crosby’s a blue-collar worker who helps an orphan girl (Gloria Jean) find her long-lost uncle, and delivers a show-stopping version of the title song.

And Here Come the Waves has Crosby as a popular songster enlisting and creating havoc in the Navy, falling for twins (played by Betty Hutton) and singing classics like "That Old Black Magic" and "Ac-cent-u-ate the Positive" (the latter, unfortunately, in blackface). The collection is a great cross-section of Crosby’s career and shouldn’t be missed by fans of him or of American film in the ’40s.