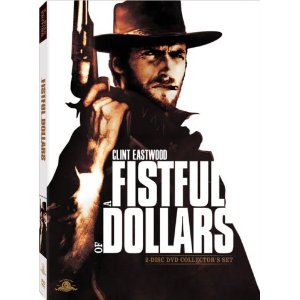 A Fistful of Dollars launched the spaghetti Western and catapulted Clint Eastwood to stardom. Based on Akira Kurosawa’s 1961 samurai picture Yojimbo, it scored a resounding success (in Italy in 1964 and the U.S. in 1967), as did its sequels, For a Few Dollars More and The Good, the Bad and the Ugly. The advertising campaign promoted Eastwood’s character–laconic, amoral, dangerous–as the Man with No Name (though in the film he’s clearly referred to as Joe), and audiences loved the movie’s refreshing new take on the Western genre. Gone are the pieties about making the streets safe for women and children. Instead it’s every man for himself. Striking, too, was a new emphasis on violence, with stylized, almost balletic gunfights and baroque touches such as Eastwood’s armored breastplate. The Dollars films had a marked influence on the Hollywood Western–for example, Sam Peckinpah’s The Wild Bunch–but their most enduring legacy is Clint Eastwood himself.