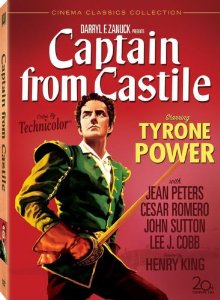 Fox honcho Darryl F. Zanuck pulled out all the stops for this expensive 1947 film, which welcomed Tyrone Power back to the world of costume adventures after his World War II service. Power plays Pedro de Vargas, victim of the Spanish Inquisition, who flees to the New World under the flag of the Cortez expedition. This kind of story would have been made in the studio before the war, but the postwar craze for location shooting gives the movie a real visual sweep (it also ballooned the budget to a reported $4.6 million, a huge tab for the era). The Mexican locations are excellent throughout, with the real coup in final section, shot under the shadow (sometimes literally) of an actual erupting volcano–a marvelous real-life effect that director Henry King uses as often as possible.

King worked often with Power, and their shared foursquare approach makes the film satisfying, if rarely exhilarating. The moral complexities of a foreign invasion are dealt with only obliquely, and mostly in Vargas’s conversations with an Indian native (nice small role for future Tonto, Jay Silverheels). Romance comes from a Spanish peasant girl who tags along for the journey; she’s played, in her film debut, by Jean Peters, who would eventually marry Howard Hughes. Peters had won a beauty contest and a trip to Hollywood, and promptly landed the lead in Captain from Castile; in some shots she’s an absolute knockout, in others a plain-faced girl out of her depth. Filling in the story are John Sutton’s ice-cold villain, Lee J. Cobb’s lusty treasure-seeker, and Cesar Romero’s bearded, grandiose Cortez (one of the juiciest roles in Romero’s long career). Tyrone Power had completed two offbeat projects at Fox after returning from WWII, The Razor’s Edge and Nightmare Alley, so strapping on the doublet and hose was a way of paying back Zanuck. It worked–the movie was a hit–even if Power sometimes chafed at the doublet.